Reversing Discoid Lupus with the Help of Diet and Homeotherapeutics

Reversing Discoid Lupus with the Help of Diet and Homeotherapeutics 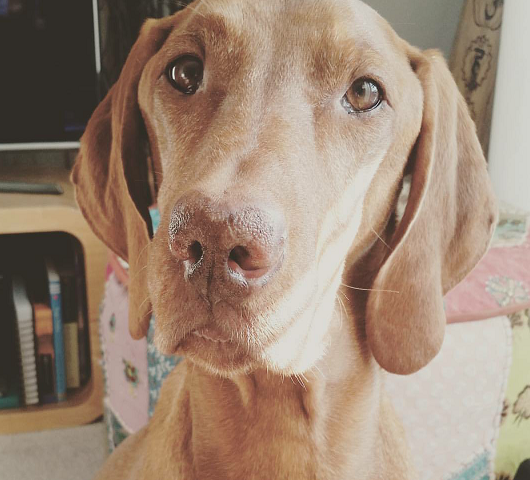 A 6 year old male, neutered Vizsla was treated for immune-mediated skin disease affecting his nose, Discoid Lupus causing destruction of part of the nostril was confirmed via histopathology. The dog was initially partially responsive to Tetracycline and a combination of prednisone and a topical treatment for over 18 months with multiple relapses as soon as the antibiotic was discontinued. Response was achieved with changing to a bioregulatory home-prepared diet consisting of 100% vegetarian diet for 3 months, then, gradually adding in organic meats. The diet did not consist of any grains. Biopuncture was also used, injecting specific homeotherapeutics into acupuncture points, with autosanguis; using the patient’s own blood. In addition, oral homeopathics were given daily as well as a clean-sourced blue-green algae supplement. Remission occurred after 3 treatments, in 1 month intervals, and has not relapsed. At the time of writing this paper, 8 months after the last treatment, the dog is still in full remission.

A 6 year old male neutered Vizsla dog presented in October 2015 with a history of immuno-mediated skin disease with a history of sever ulceration of the right nostril due to immune-mediated skin disease, which Discoid Lupus was confirmed via histopathology. Upon physical exam, the patient weighed 28.18 kg. Severe ulceration was noted on the right nostril. All other physical findings were within normal limits. Owner reported that the patient had a good appetite, good bowel movements and was otherwise normal.

Correcting the functionality of the digestive system, tissue acidity and down-regulating the immune system with the aid of the diet was the goal of the treatment. Upon initial examination, we changed the patient’s diet to a whole food 100% organic vegetarian diet consisting of cooked lentils, cabbage, green beans, chick peas and no grain. The owner would weekly rotate between 1 source of legume and 2 sources of vegetables while gradually adding in vegetables. A biopuncture and autosanguis treatment was performed at the first visit using Traumeel (a) containing Aconitum napellus (b), Arnica montana (c), and Belladonna (d). To begin the procedure, 1.5mL of Traumeel was drawn into a sterile 3mL syringe, and 1mL of that Traumeel was administered intravenously using a 3mL syringe with 23-gauge needle into the cephalic vein. One mL of blood was then drawn back into the syringe. The plunger was pulled back to allow 2 mL of air into the syringe. The Mix was then succussed 39 times and injected subcutaneously using a 27-gauge needle along the bladder meridian on BL23, BL21, BL27, BL28 and SP6. The same syringe and needle was used to draw up 1.5 ml of Nux Vomica-homaccord (e) which was succussed 30 times with the aforementioned method, and the injections were repeated in the aforementioned acupuncture points. A homeopathic medicine was prepared with 1 ml of Traumeel, 1mL of Apis (f), 1mL Chelidonium-homaccord (g), 1mL of Neurexan (h) 1 ml of Nux Vomica-homaccord, 1mL of Apis (i), 1mL of Ubicoenzyme (j) and sent home with the owner to be given to the patient (15 gtt PO q 8 hr). The goal of this specific treatment was to immune-modulate the digestive tract. Also, the owner was advised to add in a probiotic; HMF Powder (k) at 1 scoop by mouth twice daily. The client also started using Moducare (l) at 2 tablets by mouth twice daily.

Upon the follow up visit one month later in November, there was a 60% improvement in the lesions. In the subsequent visit, the patient lost roughly 10% of his body weight, which is expected on a vegetarian diet to the lower calorie content of the food. Owner was forewarned of this occurrence. The dog remained in a healthy body condition. The treatment protocol involved the owner continuing to give the oral homeopathic preparation (15 gtt PO q 8 hr). At a repeat visit in mid-December, the skin ulceration had improved by approximately 80%. We added in BioSuperfood BSA (Formula 1) (i) a clean-sourced blue-green algae supplement (1 PO q 24hrs). The patient also continued on the oral homeopathic.

At a follow up visit in January of 2016, the ulceration was almost completely healed and the nostril looked normal. The nostril ad improved to approximately 99% and the tissue of the nostril was regenerating. At the current time, the patient remains in remission.

Since we believe that the down-regulating the immune system is achieved much easier in an alkaline environment, in our experience, initially changing the diet to a 100% organic vegetarian diet for at least 3-4 months will result in a faster outcome. It’s also very important, by putting patients on a 100% vegetarian diet, to monitor the patient’s weight very closely to avoid drastic weight loss. 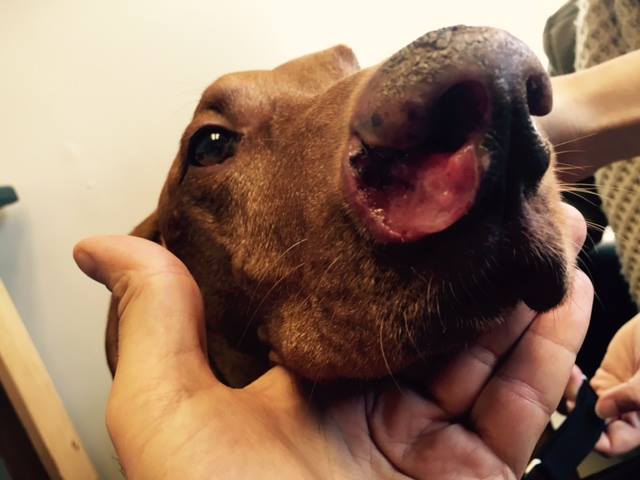 Figure 2. During Treatment as of November 2015 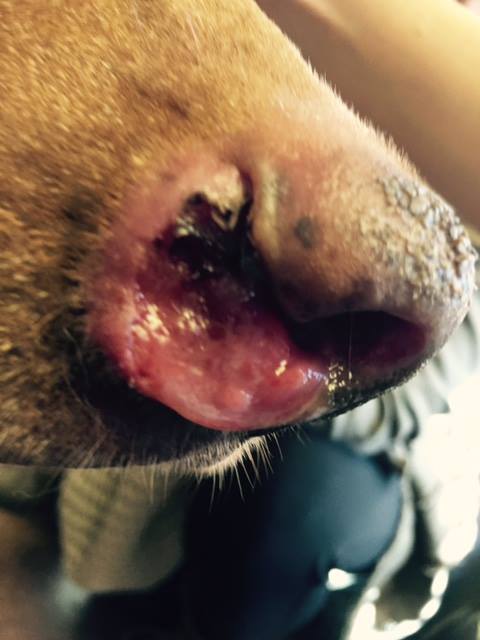 Figure 3. Treatment Progress as of December 2015 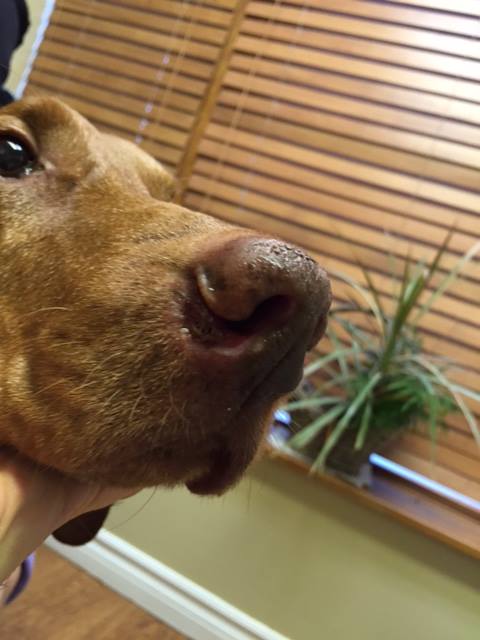 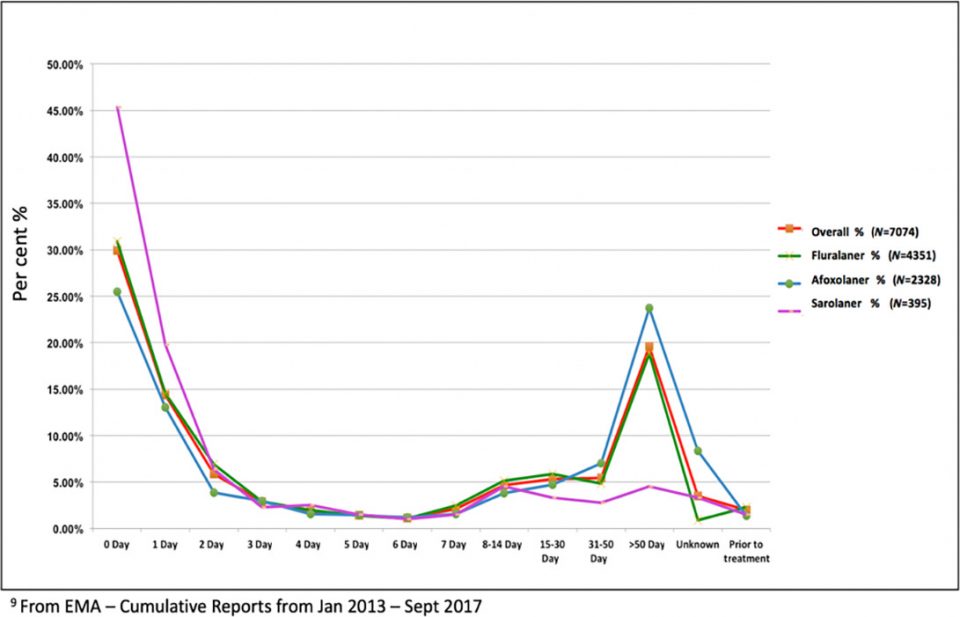 Survey of canine use and safety of isoxazoline parasiticides 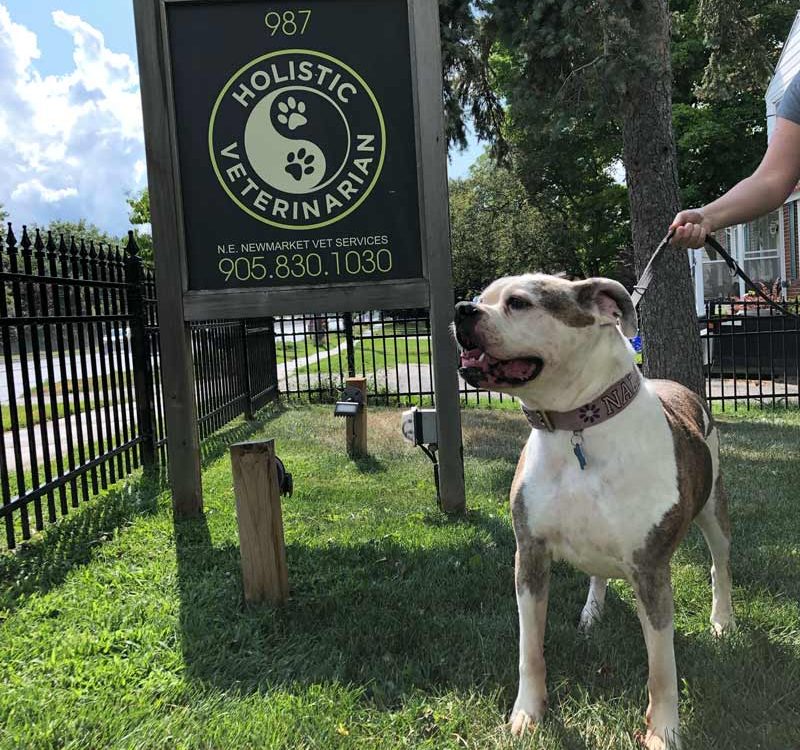 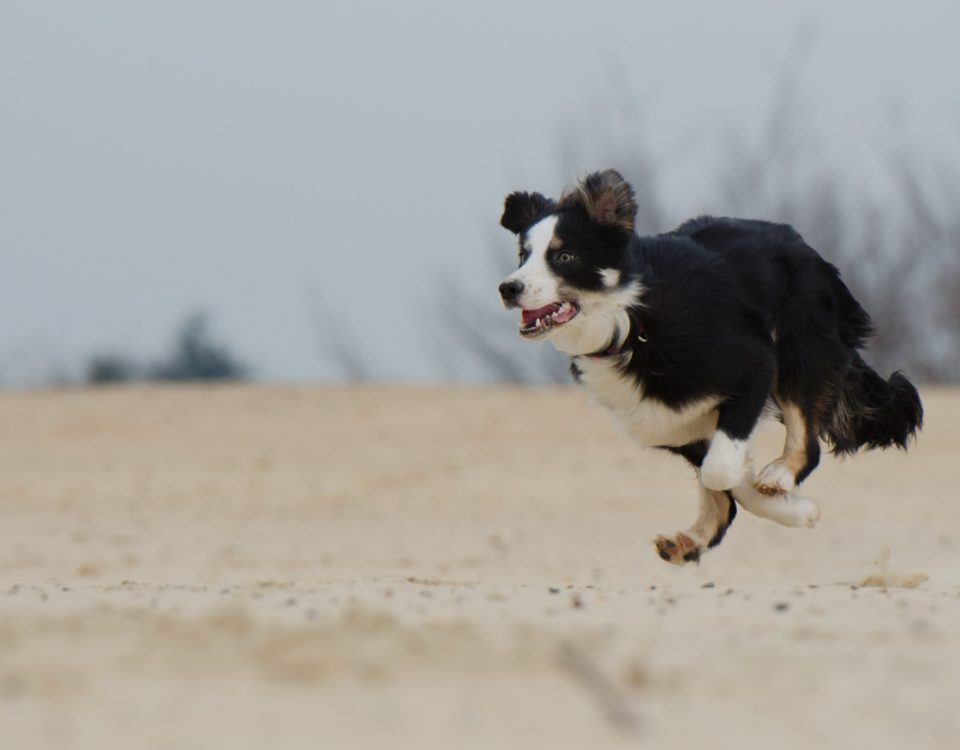